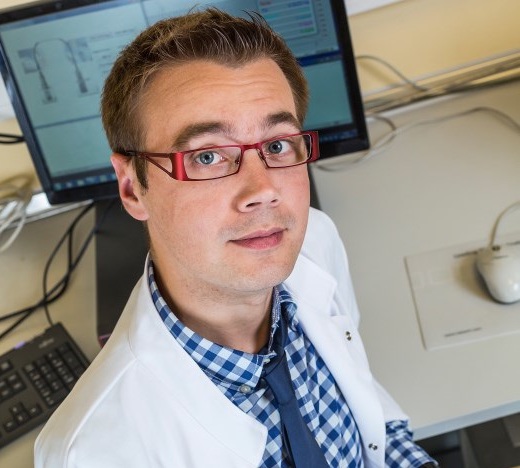 Krzysztof Fic graduated in Chemical Process Engineering at the Faculty of Chemical Technology, Poznan University of Technology on 5th June 2008 after the defence of Master Thesis ‘Modelling of vapour-liquid equilibrium by artificial neural networks’.

On 10th June 2008, he was accepted for the position of research assistant in the Department of Applied Electrochemistry. On the 1st October 2008, he began his Ph.D. study with a major interest in electrochemistry. At the same time, he participated as an executive researcher in the Polish-French industrial project ‘Development of reversible hydrogen-oxyhydroxide cell’ between the MID Dreux (France), MHS Equipment (France) and the Poznan University of Technology (Poland). The project was completed on 31st December 2009. He also participated in the European research project “COST 542 – WG1/ESR – Materials for Energy”, finished on 31st January 2010.

In 2011, he was awarded by ‘Ventures’ program, funded by the Foundation for Polish Science. Project ‘High-energy electrochemical capacitor operating in redox active electrolytes as an innovative source of power’ was devoted to understanding and exploiting the novel type of pseudocapacitance of electrochemical capacitors originating from the electrolyte solution. He was a coordinator of this project (from January 2011 to January 2012). The work was further continued within the INTER project financed by the Foundation for Polish Science; by involving electrochemical sensors as tentative energy sources, this project perfectly developed the idea of interdisciplinary research.

In October 2011, he took a research internship at Heyrovsky Institute in Prague, supervised by Prof. Ladislav Kavan. The major goal of this stay was the training in spectroelectrochemistry of carbon materials, particularly for Raman spectroscopy. This visit resulted in common, continuous scientific collaboration in spectroelectrochemical research of carbon materials, essentially for understanding hydrogen electrosorption process on carbon electrodes.

In 2013 – 2015 he spent six months in Solvay company (Brussels, Belgium) serving as an Experienced Researcher in the Energy Caps project within IAPP Marie Curie Action.

He was a member of Organizing Committee of the 2nd International Symposium on Enhanced Electrochemical Capacitors held at Poznan University of Technology in June 2011.

Ph.D. dissertation of Krzysztof Fic was defended and also awarded on 5th June 2012. Since 1st October 2012, he is employed as an academic teacher at the Institute of Chemistry and Technical Electrochemistry of Poznan University of Technology. His research interests focus on the electrochemical activity of selected redox couples and their application as a novel source of pseudocapacitance of carbon-based electrochemical capacitors.

In 2013-2015, he managed two scientific projects founded by Polish Ministry of Science and Higher Education and National Centre for Research and Development with a total budget more than 270.000 EUR devoted for young scientists, namely IUVENTUS PLUS and LIDER. At the same time he was an administrative manager and researcher in two European Projects (EU FP-7 Marie Curie Action: Industry Academia Partnership and Pathways called ENERGY CAPS and FP7-Energy pillar: Nanowires for energy storage).

In July 2015 he was selected by French Embassy in Warsaw for a one-month research stay in France as an award for his scientific achievements; then, in February 2016, he visited the Institut de Science des Matériaux de Mulhouse, where under the supervision of Dr. Camelia Ghimbeu he was trained in the advanced characterization of carbon materials.

He served as a scientific supervisor in two projects funded by National Science Centre; within PRELUDIUM project he supported Dr. Jakub Menzel in his research on supercapacitors exploiting iodide/iodine redox couple at low temperatures. In FUGA project, he served as a mentor of Dr. Agnieszka Brzózka in her research on polymeric nanostructures for advanced supercapacitors.

Moreover, he served as researcher and an executive manager of the Polish-Swiss Research Programme (PSPB 107/2010) realized in cooperation between Institute of Chemistry and Technical Electrochemistry (Poznan University of Technology) and Paul Scherrer Institute (Villigen, Switzerland) concerning in-situ investigations of next generation electrochemical capacitors.

Recently, he is a principal investigator in the Starting Grant (GA 759603) funded by European Research Council. The project timespan: 2017-2022.

Krzysztof Fic is the co-author of 55 papers indexed in ISI Master Journal List with total Impact Factor over 200. His H-index is 18, and citation number approaches 2 000 records (excl. self-citations).

He is also co-author of 16 patents and 20 patent applications.

Since December 2016 he serves as a Member of Polish Young Academy at Polish Adacemy of Sciences.

In 2012-2020 he supervised 15 engineer theses and 20 master theses. In 2015 and 2016 he was appreciated by ‘The best academic teacher’ honour at the Faculty of The Chemical Technology in anonymous voting procedure performed by students.

Projects with scientific supervision, with other researchers as Principal Investigators

Created by pawel.design with help of Freepik & Elementor